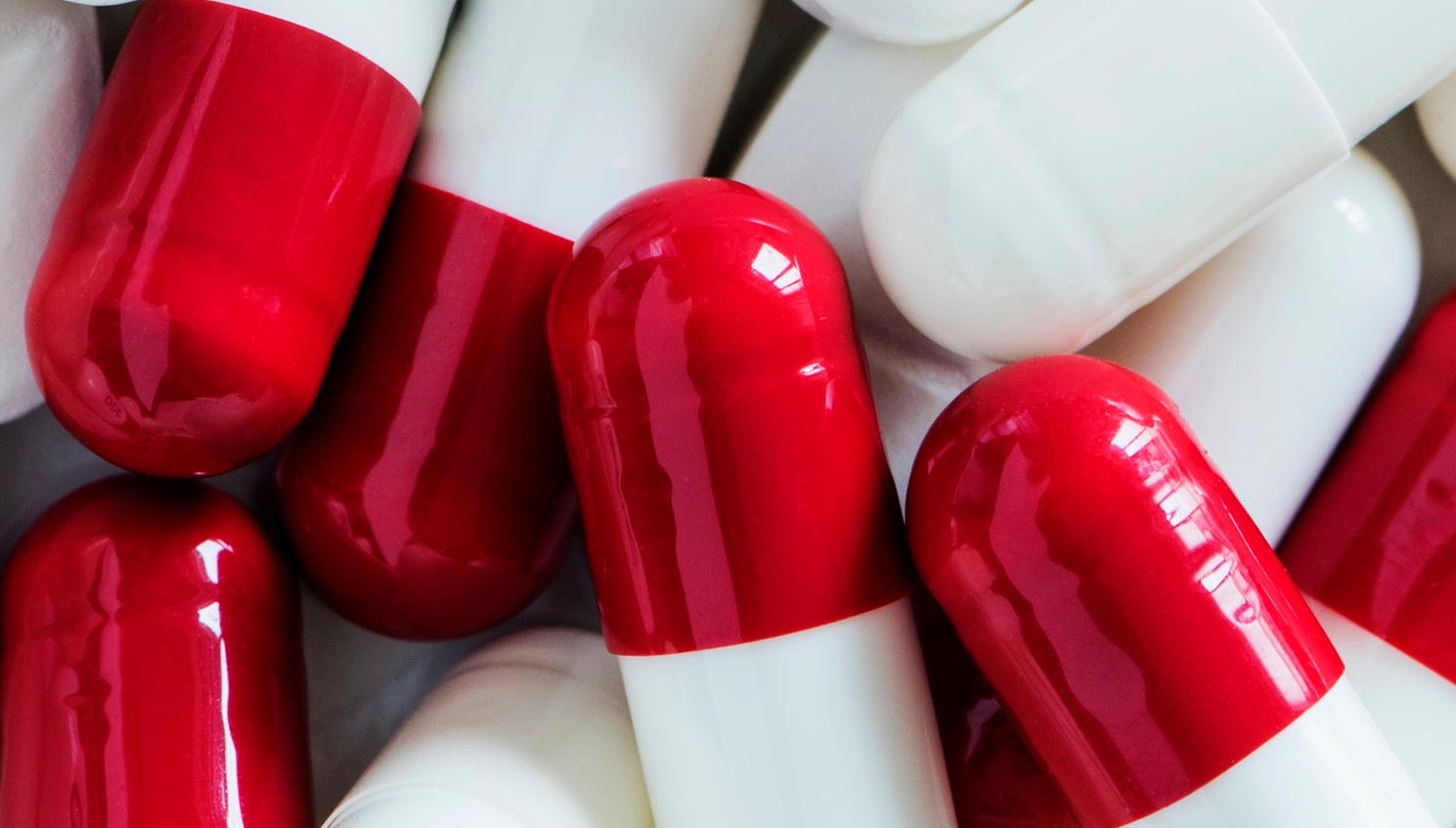 How a drug — more precisely an active pharmaceutical ingredient (API) — is taken up by the body and delivered to the site of disease, has a tremendous effect on the efficacy of the API itself. A large amount of research has been done on applying metal-organic frameworks (MOFs) as drug delivery agents. We take a look into what good drug delivery agents do and why metal-organic frameworks are well suited for this job.

While there are other pharmaceutical and biomedical applications of metal-organic frameworks, drug delivery makes sure that drugs are applied exactly where they’re needed most. Drug delivery, the concept of administering APIs into the human or animal body, can be done in various ways — from pills to skin ointments (cremes) and inhalation to intravenous and intramuscular injections. We won’t cover long-term implants in this article, but that would be another option. After the intake of the drug, the API still needs to be delivered to the actual site of disease (such as inflammation, a cancer tumour, etc.). Effective drug delivery ensures robust action against the disease, fast recovery, minimal drug intake, and minimal side effects. Finally, the choice of drug delivery influences the quantity of the drugs administered and is therefore critical to the health of the human or animal.

How does drug delivery technology work?

Medical drugs are distributed within an organism in different ways: diffusion, degradation, affinity to certain environments, etc. To bring active ingredients to the site of disease, the best distribution mechanism is selected, and the pharmacokinetic profile of the drug is fine-tuned. In a simple example: a pill against inflammation needs to degrade in gastric acid, the API is subsequently taken up into the bloodstream and delivered to where the inflammation actually is.

There are already many materials in use that meet these requirements partially.

Nanoparticles are extensively used for targeted drug delivery because of their tuneable size and properties. The nanoparticles are usually polymeric (made from a simple repeating chemical unit) and can be found in nature or be synthesised in labs. As we can control size and network dimension, they can be custom designed depending on the drug that is loaded on to it and the route of intake.

As these drug carriers interact in vivo, it is only logical to have them biocompatible, non-toxic and biodegradable (to flush them out of the system). Because of this, naturally existing biological polymers such as liposomes, micelles, and protein molecules are often used. Besides their positive features, they also feature sensitive biodegradability and are therefore quickly cleared out of the system. Therefore, a combination of natural and synthetic components is essential to make nanoparticles well suited as drug delivery carriers.

The most commonly used synthetic polymer in drug delivery is polyethylene glycol. It is used in conjunction with the drug loaded carrier to increase the stability. This increases the clearance time (the time it stays in the body) so that the drug acts effectively on the desired target.

Magnetic nanoparticles are also used in combination with biological carriers to guide and control the drug release creatively. These nanoparticles have a niche application in treating certain diseases like cancer.

Finally, porous silica and metal nanoparticles are some of the other materials used for drug delivery as well.

Why MOFs are the future of drug delivery agents

To meet the above requirements, effective drug carriers have tuneable size and morphology, alterable drug loading and good biocompatibility. MOFs satisfy these criteria and — in contrast to inorganic systems such as silica and some nanoparticles — show no or low toxicity.  Metal-organic frameworks are compounds of metal ions and organic linkers, that form hollow and in most cases crystalline structures. The frameworks can be compared with sponges in nano scale, that can adsorb molecules on their surface or hold them within their pores. 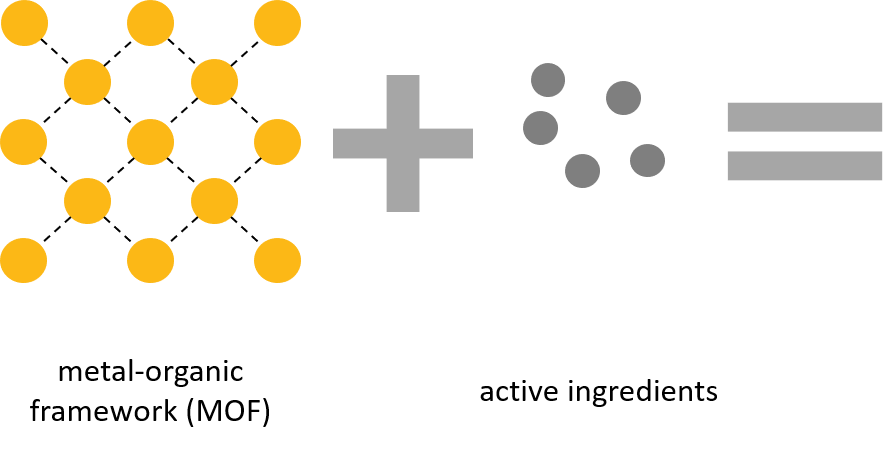 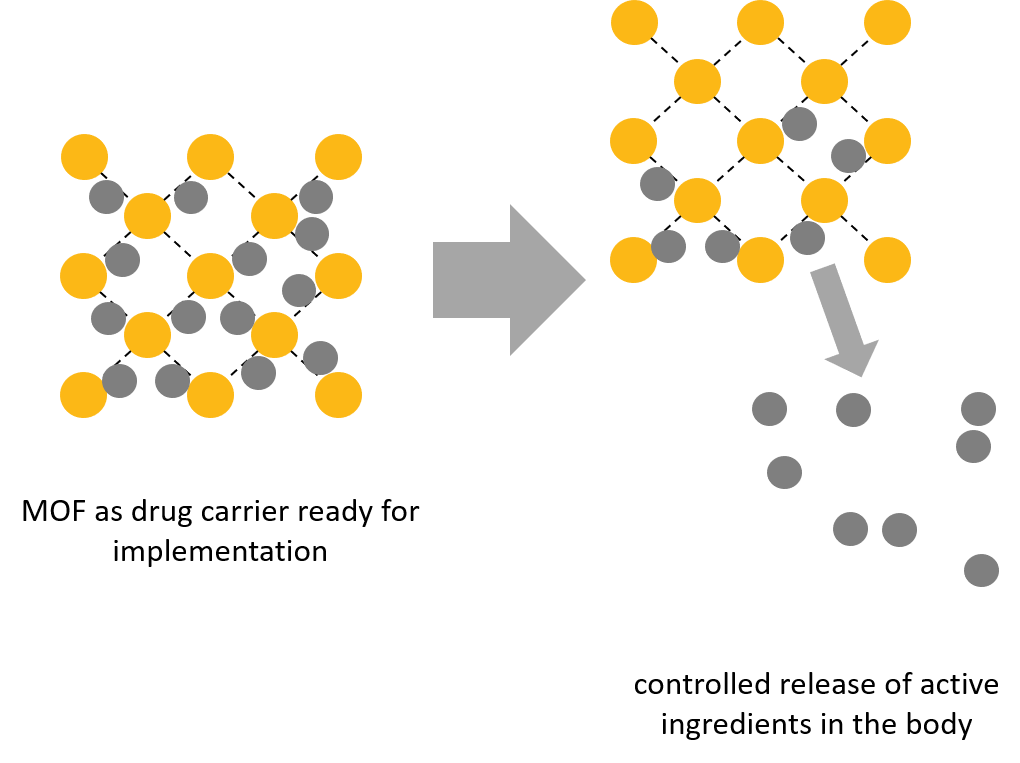 The core reasons that set apart MOFs from other inorganic materials used for drug delivery are:

A seemingly simple method is encapsulating the API in the framework of the MOF. This method requires the API molecules to fit within the pores of the MOF without leaking. The drug is then delivered by degradation of the framework itself.

Another widely researched option is the adsorbtion of the API molecules on the surface of the MOF. The API and the MOF – or rather the organic linkers – bind to each other using open binding sites. This does not only require matching binding sites, but also a matching morphology. If the API molecules are to big for the framework, they can only be bound on the very outer surface, which leads to reduced drug loading capacity.

Depending on the API, they have the ability to create bonds with other organic linkers or even metal-ions and thus be the linker themselves.

The MOF drug carrier is tuned to the admission route in or on the body and releases the API in a controlled manner. This renders intramuscular admission obsolete and improves intravenous and oral admission. Furthermore, depending on the MOF and the carried drug, the release lasted from several hours up to 80 days making them perfect for a wide variety of applications. 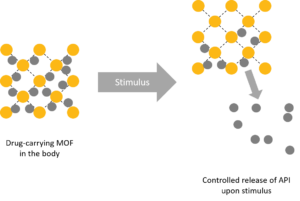 To ensure that the carried drugs are delivered to the actual site of disease, the release is triggered by specific stimuli. These include pH-levels, magnetic fields, ions, temperature, light or pressure.

Controlled release of active ingredients can render intramuscular admission obsolete or improve intravenous and oral admission, as the carrying MOF is tuned to the admission route in or on the body. Furthermore, depending on the MOF and the carried drug, the release lasted from several hours up to 80 days making them perfect for a wide variety of applications.

While this might sound rather technical, research has pushed quite far already and many promising applications have been found.

Research about MOFs as drug delivery agents focuses predominantly on treatment of cancer, tumour eradication, antibacterial treatment, photodynamic therapy. Some of these diseases have been challenging to treat using conventional drug delivery materials. However, MOFs are very promising to carry out advanced treatments and cure biologically more complex diseases.

Several MOFs have already been tuned to great drug delivery capabilities while maintaining low toxicity. The drugs used so far range from aspirin, ibuprofen, caffeine, doxorubicin, cidofovir, nicotinic acid and especially cancer treatments. Many other drugs are possible given the tunability of the frameworks and the various options for carrying the drugs.

In-vitro tests have proven that metal-organic framework based on Gadolinium only attacks liver cancer cells while healthy cells remain unaffected. This MOF has a high drug loading capacity, which reduces the frequency of dosage. Furthermore, the carrier releases the drug on a specific pH stimulus to deliver the cargo specifically to the site of the disease.

While oral drug intake is the most common way of administering drugs, the carries mostly have low drug loading capacity and degradation resistance. MOFs are prone to degradation in gastric acid but have superior benefits once they are in the bloodstream. To prevent early drug release, protective measures need to be taken.

A recent publication has shown that introducing certain electrostatic interactions between the Zr-MOF and the drug molecule prevents the MOF from degradation in acidic conditions. This allows the drug-carrier system to get past the stomach and gastrointestinal tract and safely deliver the cargo to body parts with higher pH levels. This has worked in-vitro on PC12 rat cells.

Photodynamic therapy is one of the options to curing cancer in recent years. When activated with light in the presence of oxygen, photosensitizers produce a chemical entity known as reactive oxygen species (ROS). ROS induces cell death and is used to kill e.g. cancer cells. Therefore, photosensitizer and light exposure need to be precisely located to minimize eradication of neighbouring healthy cells. This is where MOFs come into the picture; we can incorporate the photosensitizer into a MOF, that specifically binds to cancer cells. Porphyrin-based MOFs (PCN-224) have shown promising results in photodynamic therapy because of high photosensitizer loading capacities. Their functionalisation with proteins like DNA makes them bind to cancer cells. The bound photosensitizer produces ROS once light is around – and they kill the cancer cell. Furthermore, these photo-responsive MOFs can also be loaded with chemotherapy drugs to increase cancer cell mortality. This has been experimentally tested in-vitro and the MOF showed no remarkable toxicity. 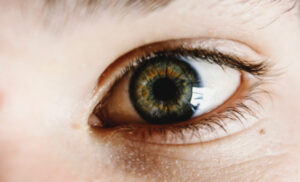 Glaucoma is second largest cause of irreversible blindness and it affects millions of people. The primary way of treating this condition is by halting the further loss of vision via medications. The conventional materials used for treating Glaucoma and other ocular conditions include hydrogels, microsphere or nanoparticles. However, they tend to suffer from poor loading capacity and fast release of drug. For the first time, scientists have shown that Zr MOF (UiO-66) is an excellent candidate for ocular drug delivery because of high loading capacity and great biocompatibility with the photoreceptor cells in the eyes. Also, the release of drugs was slow which is preferred for long-term treatment. The experiments were performed in vitro photoreceptor cell line 661W.

More drug-resistant strains of bacteria are on the rise and it is essential to curb them from spreading health problems. These bacteria demand the further development of widely used drugs, which is time, capital and energy intensive. In addition to this, state-of-the-art antimicrobial materials (mainly nanoparticles) are released in an uncontrolled fashion. This leads to toxic side-effects and unwanted waste of the drug.

In an attempt to solve this issue, scientists recently developed a MOF based system containing silver (Ag) nanoparticles. Silver is long known for its fantastic antibacterial action, but it’s expensive. Therefore, a surface adaptive, on-demand antimicrobial agent was developed that used the synergic effect of antimicrobial silver particles and photosensitive porphyrin containing zirconium (Zr). In simple words, the antibacterial effect of the system is active only in the presence of the targeted bacteria. When the drug-carrier system comes in contact with the targeted bacteria under irradiation of visible light, the released silver nanoparticles and reactive oxygen species (ROS) from the MOF both attack bacteria. The synergetic effect kills the bacteria immediately. They have successfully demonstrated this in-vivo on mice affected by MRSA strain bacteria.

MOFs have shown a great deal of promise in different areas of science, most importantly in improving the quality of our lives through better medical treatment. While there are already many drug delivery agents present, they have their (in some cases significant) drawbacks. Metal-organic frameworks tick the right boxes when it comes to drug loading capacity, size, biocompatibility and release options. What’s really limiting MOFs from pharmaceutical applications is the lack of sufficient clinical trials and scaled-up production of these materials. We are optimistic that metal-organic frameworks will be a critical component of pharmaceuticals in the near future. 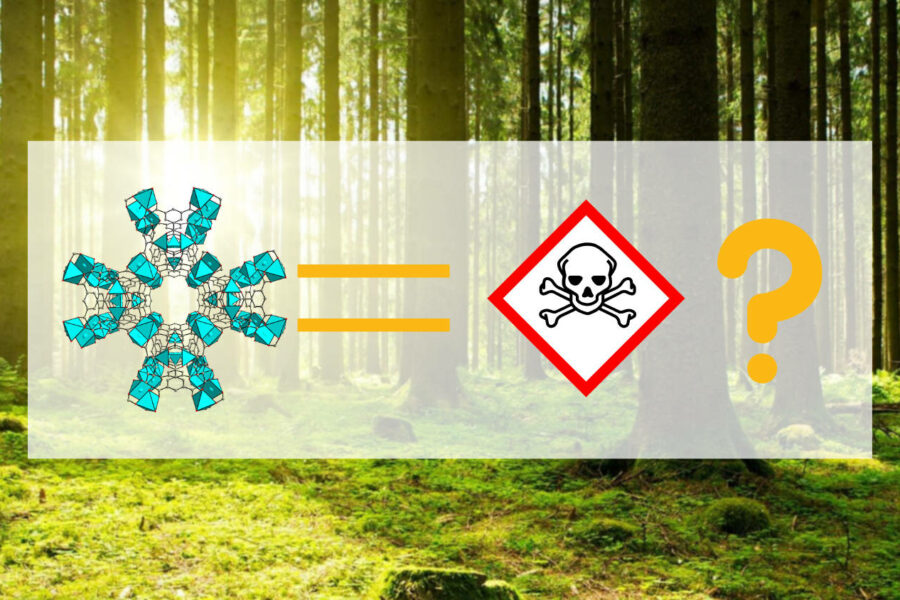 How toxic are MOFs? 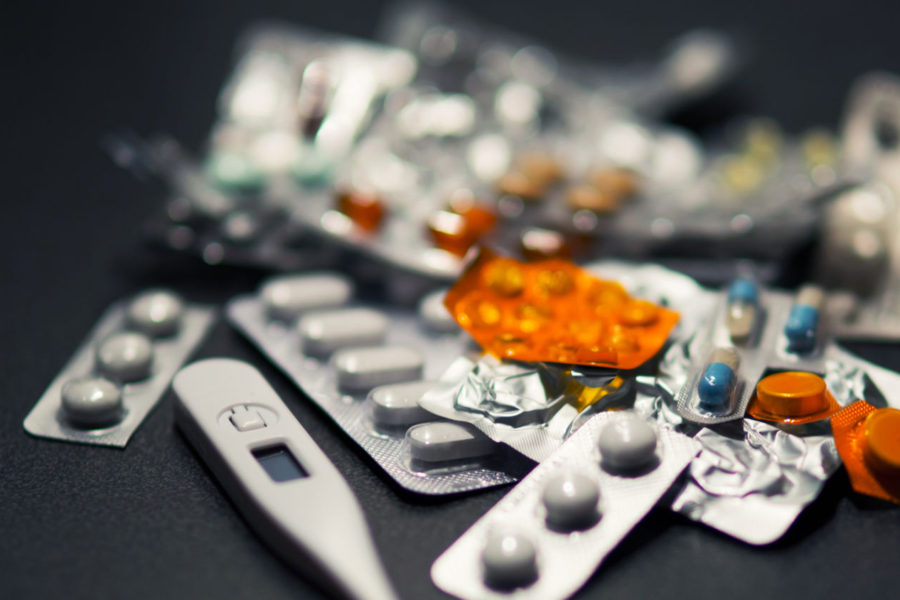